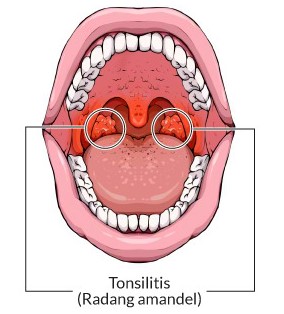 9 Myths and Facts about Tonsils

The tonsils or tonsils are two small glands in the throat that function to prevent infection, especially in children. However, with age and the body's immune system becomes stronger, the function of the tonsils begins to be replaced and their size will slowly shrink. But sometimes there are still many who believe in the myths surrounding the tonsils. Here are myths and facts about enlarged tonsils:

Fact: Predisposing factors for enlarged tonsils can be in the form of chronic stimulation from cigarettes, certain types of food, poor oral hygiene, weather influences, physical fatigue and inadequate treatment of acute tonsillitis.

Fact: The tonsils are one of the body's defense networks, which function to produce immune cells and antibodies, to filter germs that cause infection, especially germs that enter through the respiratory tract.

Fact: Tonsil surgery doesn't make you stupid. Precisely if the tonsils are allowed to enlarge, then over time the swollen tonsils can cause disturbed sleep quality and sleep apnea, so that in the morning the patient often feels sleepy, in children the learning process will be disrupted at school.

Fact: We often see that we only have one tonsil when we open our mouth. However, we have other tonsils. The tonsils that we often see are the palatine tonsils. Behind the nose, there are pharyngeal/adenoid tonsils and at the back of the tongue, the lingual tonsils are found, and are surrounded by a ring of lymph tissue near the eustachian tube which has almost the same function, which is to produce antibodies to fight bacteria or viruses that enter.

Fact: Besides being caused by bacteria, tonsillitis can also be caused by viruses, fungi.

Fact: There are many symptoms of inflammation, not just a sore throat. The symptoms of tonsillitis that can arise are very varied, ranging from symptoms of the common cold, sore throat, pain when swallowing, fever with high body temperature, feeling lethargic, pain in the joints, lack of appetite, to pain in the ears. otalgia). If it occurs for a long time, it can cause a feeling of lump and dryness in the throat, and bad breath. If the enlarged tonsils interfere with the airway, symptoms such as snoring (snoring) and breathing through the mouth may occur.

Fact: Swollen tonsils are not always caused by infection in the upper respiratory tract, but can also be caused by tumors, deep neck infections (eg peritonsillar abscess, parapharyngeal infection). Therefore, if you experience swelling of your tonsils, it is advisable to consult the nearest ENT specialist in KL.

Fact: Inflammation of the tonsils does not always have to be operated on. There are several conditions in enlarged tonsils that require surgery, such as: