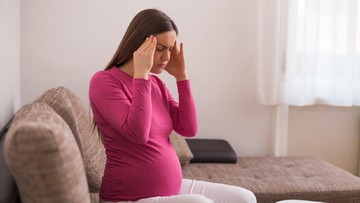 Anemia in pregnancy has become a national trend that has an impact on the nation's successors. According to basic health research data, 37% of pregnant women in Indonesia are anemic. When a woman is pregnant, there will be changes in the body that will affect health conditions. Naturally, the body of pregnant women will form more red blood cells to meet the oxygen and nutritional needs of the fetus. The production of red blood cells and hemoglobin requires various components, such as iron, folic acid, and vitamin B12. If the body lacks one of these substances, anemia can occur (lack of red blood cells). Anemia in pregnant women should not be ignored because it can endanger themselves and the fetus in the womb.
Symptoms of Anemia
Some pregnant women with anemia do not cause symptoms, so they are often ignored. However, with increasing gestational age, symptoms may appear or even get worse.
Symptoms of anemia in pregnant women are:
-Body feels weak, tired, and lethargic continuously
-Dizzy
-Out of breath
-Fast heart rate
-Chest pain
- Pale skin, lips and nails
-Cold hands and feet
-Difficulty concentrating
Causes of Anemia in Pregnancy
The causes of anemia in pregnant women vary, one of which is a lack of iron and vitamin B12. This is influenced by an unhealthy diet. In addition, other medical conditions such as bleeding, kidney disease, and immune system disorders also cause anemia.
Risk Factors for Anemia in Pregnancy
All pregnant women are at risk for anemia. Factors that increase pregnant women experiencing anemia are:
-Pregnant twins
-The distance of pregnancy is too close
-Vomiting and nausea during pregnancy
-Pregnant teenage years
Less consumption of foods rich in iron and folic acid
Have a history of anemia before pregnancy

Dangers of Anemia in Pregnancy
Anemia is a common health problem in pregnant women, but it should not be underestimated. The following are some of the dangers of anemia:
-Bleeding during childbirth
-Depression after giving birth
-Babies born with low weight
- Babies born prematurely
-Babies born with anemia
-Fetal Death
How to Overcome Anemia in Pregnancy
To overcome anemia in pregnancy, here are some things that need to be done:
1. Eat nutritious food
The recommended foods are foods that are high in iron and folic acid. Examples of foods that are high in iron are:
- Cooked low fat meat
-Seafood such as fish, squid, and shrimp that are cooked thoroughly
- Hard-boiled eggs
-Green vegetables, such as spinach and kale
-Peas
-Pasteurized dairy products
-Potato
-Wheat
While foods contain high folic acid, namely:
-Green vegetables such as spinach, broccoli
-Fruits such as oranges, avocados, papayas, bananas
-Nuts such as peas, kidney beans, soybeans
-Wheat
-Egg yolk
-Watch
2. Consuming Vitamin C
Vitamin C helps the process of absorption of iron from food more effectively. Consumption of vegetables and fruits high in vitamin C such as oranges, broccoli, tomatoes can help overcome anemia in pregnant women.
3.Take Supplements
Intake of supplements such as iron, vitamin B12, and folic acid can help overcome anemia in pregnancy.
How to Prevent Anemia in Pregnancy
One way to prevent anemia during pregnancy is to take iron supplements. In addition, regulating a good diet can also help the occurrence of anemia during pregnancy. Eat foods high in iron, folic acid, vitamin B12, and vitamin C.