He completed his Bachelor of Economics from University of Indonesia. 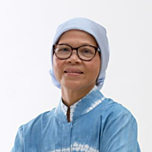